Few sports are as easily accessible as table tennis. You don’t need lightning-quick reflexes or the hand-eye coordination of Andy Murray to enjoy the rush of a good ping pong rally – just a little perseverance and the right facilities. Luckily, villas with table tennis tables are easy to come by. Here’s how to make the most out of them with three fun games. 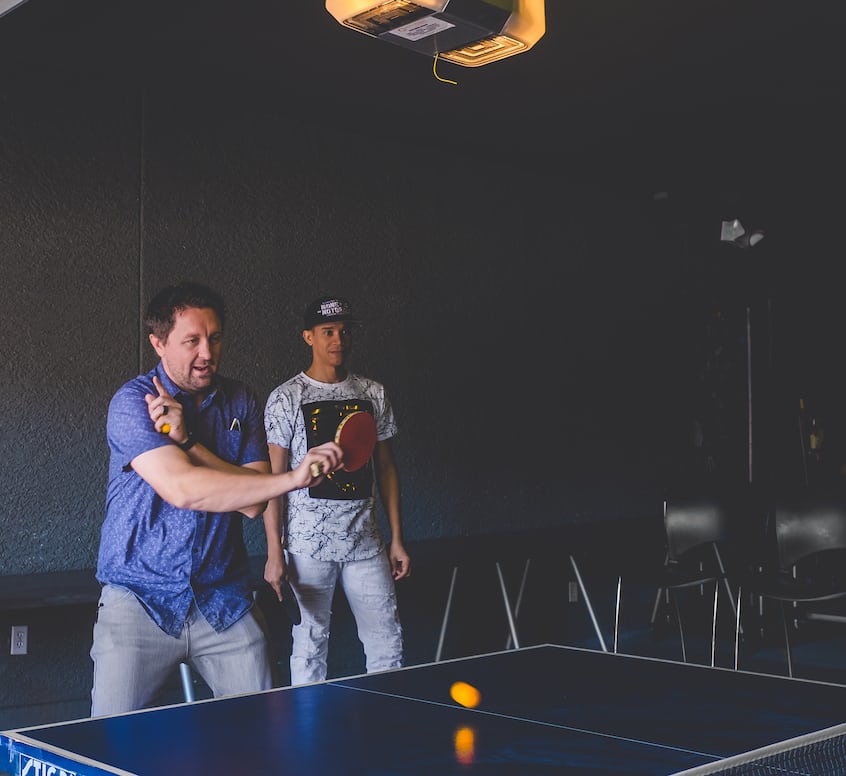 Image by NeONBRAND on Unsplash.

1. Round the world ping pong

If you’re holidaying in a bigger property with friends or family, then get everyone up and active with this fast-paced, inclusive variation on traditional table tennis. You’ll need one ball and a minimum of two bats, although if everyone playing is able to have one, then it’ll make the game that little bit easier.

Form a circle around the table tennis table. One player starts by hitting the ball across the table, before proceeding to move clockwise around it. The aim is to keep a rally going without making any mistakes, all the while continuing to rotate around the table in a circle.

Each participant starts with five points, and they lose points when the ball goes out of play on their turn. Players are disqualified when they lose all their points, so keep your wits about you and battle it out until you’re the last one standing!

Let’s say that a fellow table tennis aficionado can’t quite tear themselves away from the poolside lounger (they’re on a relaxing villa holiday, after all), but you want to get a few rallies in before dinnertime. Not to worry, just play against yourself.

Fold one half of the table up 90 degrees so it forms a vertical wall which you can hit a ball against, then lock it in place. Don’t attempt to do this alone, though – ping pong tables are heavy, and you don’t want to risk injuring yourself.

Once everything’s in place, brush up on your topspin or nail that forehand smash once and for all. Who knows, maybe those extra few hours practice could be what it takes to make you the formidable player you’ve always dreamt of becoming.

Combine two much-loved racket sports and get ready to really utilise all of your reflexes. Place the table against a wall, with the net remaining at a 90-degree angle to the wall. With one other player stood by the opposite side of the net, hit the ball off the wall so that it ends up bouncing on their side. Play out the rally until one person either misses the ping pong ball or bats it out of play.

Things can really speed up when playing ping pong squash, so don’t be surprised if it takes you a few games to get the hang of it! Once you’ve cracked it, though, you’re in for endless hours of entertainment, honing coordination skills that’ll serve you well in other ball games.

Of course, you can’t go wrong with a traditional game of ping pong. Set aside a few hours with an opponent and smash, backhand and spin your way to 21 points.

Image by Porsche Brosseau, used under CC License (CC by 2.0)

Ready to smash and spin your way through a ping pong-filled holiday? Look at Villa Plus propertiesand find one which suits you.

By Lara Scott. A former executive at a major hotel chain, Lara Scott is a freelance travel writer and journalist. She says her previous career gives her extra insight into both sides of the tourism industry.

This site uses Akismet to reduce spam. Learn how your comment data is processed.